Welcome to my 'other blog' the one that explores my crafty side. I have been a maker of 'things' since childhood. By nature I'm creative. I still love to write, and you can click on this link to visit my blog: Hanging On My Word, which is where I indulge in the thought and word side. Although a teacher by profession, I don't offer tutorials. This is my showcase of projects I like to share. So pull aside the curtains and let's begin (I'm a bit theatrical too!).

In The Dog House

I decided a while back that several unfinished cross-stitch and blackwork projects left in half-finished, or barely begun states, should be completed. I haven't got very far. I took photographs of all the pieces and then carefully put them away again. However, one project, however small, is a triumph of sorts. 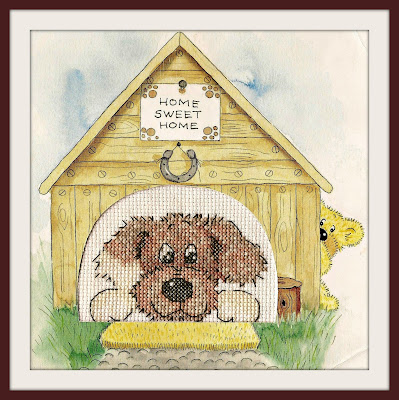 Here is 'Snatch the Dog' in his printed kennel mount, and below in the shameful unfinished state. 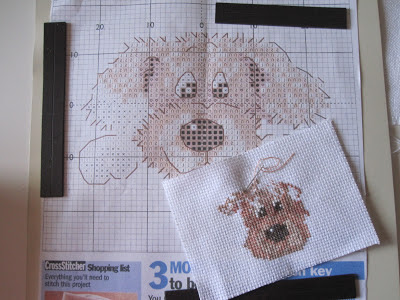 It wasn't an easy or particularly enjoyable project, which is why I parked it in the first place - all those different shades of brown, cream and beige. I used to cross -stitch whilst watching TV in the evening as a way of relaxing, but these days it seems I have one ear and eye cocked to the TV and the other on the iPad catching up with bloggers!

Ah well, Snatch is complete at last and ready for framing. I see he was a a DMC kit which originally came attached to Cross Stitcher magazine. But when I say it was the January 2003 issue that puts things in perspective. It's only taken ten years, so don't hold your breath for the others to be showcased here.

There's hope for the lovebirds I suppose. 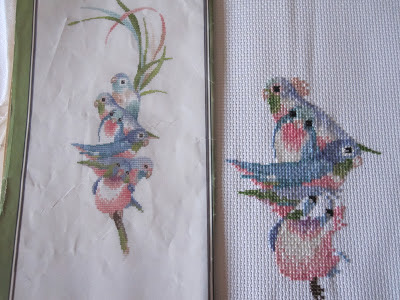 But not I fear, for the blackwork dragonfly or the wild cat's eyes. 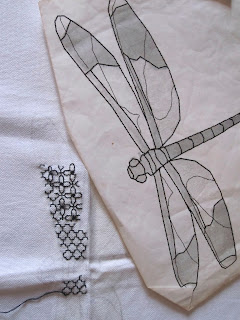 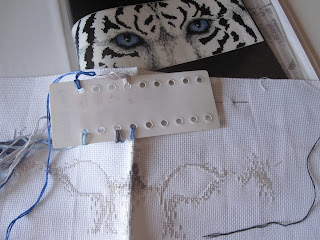 And I ought to put myself in the doghouse for not completing this one. 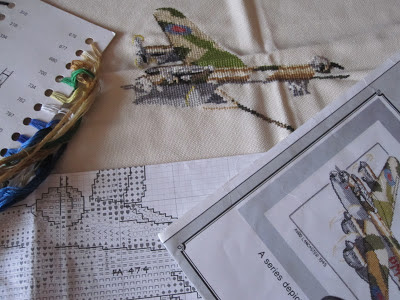 A rather ambitious project of a WW2 Lancaster Bomber. I hang my head in shame when I recall that started it a good couple of years ahead of my dad's 80th birthday, to allow myself plenty of time.  Sadly Dad died last November aged 91 and never got to appreciate the fruits of my labour. I don't feel motivated to pick it up and again either. Never mind, he and Mum were the recipients of many of my efforts over the years, including a Golden Wedding Sampler which still has pride of place in Mum's bedroom, so I think I'll risk sticking my head out of the doghouse now.

Sharing my embarrassment with Lakota's Ta-dah! Tuesday over at Faith, Hope and Charity Shopping, and anyone else who cares to wander by and leave an encouraging comment - looks as though I need it! Coincidentally I see Lakota herself has a rather more modern Cross Stitcher piece to share with you.
Posted by Little Nell at 05:55

Please Visit My Other Blog

Words and Pictures to Enjoy

Little Nell
I am a retired primary school headteacher who moved to Lanzarote for the year-round sunshine, the amazing landscape and the slower pace of life (Mañana really means mañana here). I have been married for 44 years, have a son and daughter and 11 year-old twin grandchildren. I relish the time to do what I like at last; get up when I want to, go to bed when I want to. Of course there are things I miss about England: the song of the robin and blackbird in my garden and watching the blue-tits nesting, the theatre, the art galleries, the cathedrals, but I get my fix on the visits back to Blighty and travels further afield. This is my home now, in every sense.